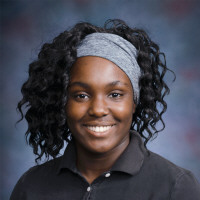 Student Spotlight
Erikah Cudjoe: In So Many Words

When students are asked to describe Sacred Heart Academy, the first word often used is family. With a campus made up of students in grade DK-12 and grade levels of around thirty students, everyone gets to know each other much like with a large extended family. Just like in families, at SHA, each member must play a role for classes to run, teams to win, and student organizations to function. In some cases, like with Erikah Cudjoe, students must assume multiple roles, manage their time, and successfully complete tasks at a high level. Fortunately, Erikah has countless qualities that allow her to not only achieve her individual goals, but positively lead the school and community in so many ways.

When asked to consider what makes Erikah Cudjoe such an amazing person, versatility is one of the first words that come to mind. These are just some of the ways Erikah is involved at SHA:

Although actions (like those expressed above) often speak louder than words, in this case, people who know her well were able to capture the essence of Erikah Cudjoe in so many words.

Self-less: Erikah will help you when she doesn’t have to such as when I was asked as part of Student Senate to distribute welcome packages to new students this year. Erikah came and helped me with this while introducing herself to the new students to make them feel welcome as well.

Passionate: Erikah is really passionate about what she believes in, but she is open-minded at the same time. She puts her whole heart into everything she does.

Wise:  Erikah is very, very intelligent, but not just book smart.  She is wise in the way she interacts with others.

Responsible: Responsible is not a very flashy word but it is so important!  When she says she is going to do something, I don't give it another thought.  I know that she will follow through and get it done.  This can be a rare quality nowadays!

Positive:  Erikah is not a thermometer.  She is a thermostat.  She is powerful enough to influence others in a positive way.  She doesn't just sit back and wait to see if she is going to like something.  She decides it is going to be enjoyable (no matter what it is) and makes others enjoy it too.  It is hard to explain how valuable this is to a teacher or leader.  To have a student like this in your group or class makes every activity better.

Dedicated: Erikah shows dedication in everything she takes on. She wants everything she does to be done to the best of her abilities. She won't take something on unless she can go all in, because she won't give less than 100% effort, in any task.

Original: Erikah is a model student athlete. She is comfortable being herself, which is an admirable trait. If she doesn't do something perfectly, she's more than comfortable learning from it instead of letting it stress her out.

While there are many other positive attributes that apply to Erikah Cudjoe, there is one word to describe how Sacred Heart Academy feels about having her be a part of the school community: GRATEFUL.